Breaking All Her Rules (Cosmo Red-Hot Reads from Harlequin) 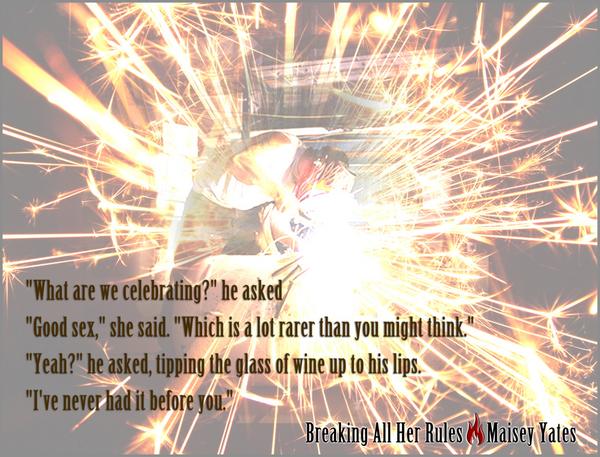 Zack felt like being in New York was a chore, part of what he had to do as a successful artist. Not that he really cared much about being successful. He was glad it paid the bills, but it was just something he did. Pretty much what his entire life consisted of for the last few years. He just walked through it, doing what he had to in order to get through it. And then - for some unknown reason - he told his cabbie to pull over and pick up the woman who couldn't get a cab, and things took a very weird turn.

A fox in her henhouse. That's what Grace called Zack Camden that day in the cab. And he drew her a sketch of a fox just before she got out, taking his phone with her. Then she suffers through a humiliating meeting with her boss, so the idea of exchanging her phone with the intriguing cowboy sounds like a good idea. Or a bad idea - or some kind of weird, new, rebellious, idea. Well, she does it anyway - and boy howdy - who cares about her stupid boss.

Zack and Grace want the same thing - which is sex with no strings. Grace has a career that doesn't include complications like a relationship, and Zack simply doesn't want any ties whatsoever. But dammit, they find themselves actually talking and becoming friends. No, more than friends. Zack hasn't confided in anyone about his pain and loss, and Grace has never felt free enough to talk about her insecurities.

Why couldn't it stay simple? Zack ends up pouring his frustration into an unfinished work - and it stays unfinished until he understands that Grace may be what he needs, even if it wasn't what he wants. And Grace finds out after she takes action that living up to other people's expectations was something she should have asked about instead of assuming - a long time ago.

'Breaking All Her Rules' is on the cusp of being a full-length book, and I'm glad. I adored it, and I could've read more. Grace and Zack (Zack especially because... RAWR!) were lovely, and also amazingly hot together. Zack's the kind of guy you want to fix - and then you just want to sit and watch him weld shirtless the rest of the time. because again - RAWR!!.

I digress, because they both had some pretty heavy issues, and they also both got resolution through talking things out while they became friends. Yeah, I said it - friends. They were super hot in the sack, but the talking part? It was all about them getting deep into a one-on-one, I understand you and your pain friendship. And that's why they ran. Also why they figured themselves out.

So yeah, great book, great story, great characters - it's all good. The epilogue was the cherry on top of the whipped cream (not literally - it's a metaphor in this case). And you won't be disappointed if you're looking for a unicorn reference, it's right up front.